Implementing nanometre-sized IrOx catalysts supported onto metal oxides
The massive production of PEM water electrolysers still requires overcoming several hurdles: (i) enhancing the oxygen evolution reaction (OER) kinetics, (ii) improving the stability of the anodic catalytic material, and (iii) decreasing the cost of the catalytic layers (low amount of noble metal). Experimental work performed more than 40 years ago has established that ruthenium oxide (RuO2) is the most efficient OER catalyst in alkaline media  but this oxide suffers instability in acidic media. Iridium dioxide (IrO2) is another interesting catalytic material: it is chemically stable, a good electronic conductor but suffers of its high cost and scarcity especially when used in the form of microparticles as it is the case in present PEM water electrolyser anodes.

In the frame of the MOISE project, we aim at synthesizing, characterizing and determining the OER activity and the stability of IrOx nanoparticles, eventually alloyed with other metal, and supported on metal oxide (MOx) aerogels. To gain fundamental insights into the early stages of surface oxides formation on Ir, we use single-crystal experiments in combination with electrochemical impedance spectroscopy, X-ray photoelectron spectroscopy and inductively coupled mass spectrometry. Recently, we have shown that oxy-hydroxides layers forming in the pre-OER region feature mixed Ir oxidation states (presence of Ir(0), Ir(+III) and Ir(+IV) species), and that the fraction of each oxidation state depend on the crystallographic orientation of the Ir(hkl) single crystal. In the OER region, our work provides evidences that Ir(+III) species progressively dissolve leading to an enrichment of the surface and near-surface regions into Ir(+IV) species, and resulting in a decrease of the OER activity. The results indicate a convergence towards a more stable but less active surface state, which does not depend neither on the initial arrangement of surface atoms (crystallographic orientation, proportion of high- and low-coordinated atoms) nor on their oxidation state (initial state vs. electrochemically-activated Ir(hkl) surfaces). To know more on this.

Ultimately, we transfer the acquired knowledge on model electrodes to industrially relevant IrOx nanoparticles. To this goal, we develop electron-conducting supports, which (i) feature a large specific surface area to maximize the distribution of the IrOx nanoparticles while preventing their agglomeration/aggregation, (ii) feature an optimal pore size distribution to allow easy access of water molecules to the electrode and oxygen removal from the electrode, and (iii) are able to withstand high electrochemical potential (E > 1.7 V vs. the standard hydrogen electrode - SHE), highly acidic environment and moderate temperature (< 80-90 °C). These operating conditions render classical high surface area supports, such as carbon blacks, unstable (carbon is oxidized at potentials above 0.207 V vs. SHE). We focus on doped-SnO2 aerogels, the morphology of which is amenable to the specifications of PEM water electrolysis, and tune their electronic conductivity by changing the nature and concentration of the doping element. To know more on this. 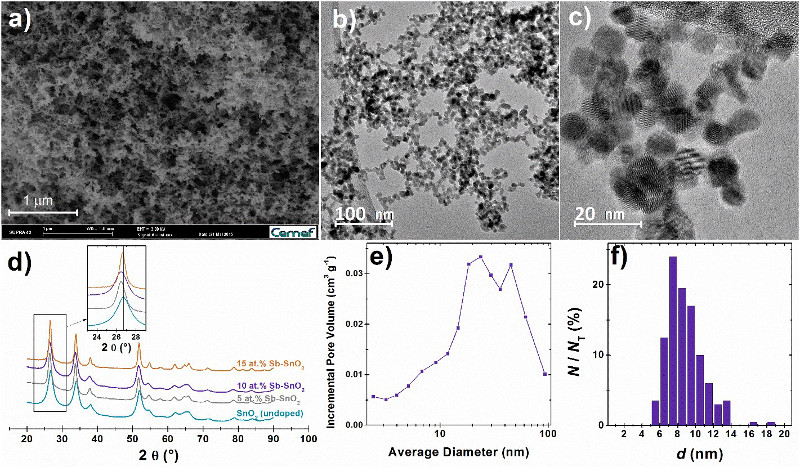 Figure 1. Structural characteristics of the doped and undoped SnO2 aerogels used in this study. (a) SEM, (b, c) TEM images, (e) pore size distribution and (f) particle size distribution of the doped and undoped SnO2 aerogels used in this study. NT is the total number of counted particles. (d) X-ray diffractograms of the synthesized Sb-doped and the undoped SnO2 aerogels.
By combining identical-location transmission electron microscopy, X-ray photoelectron spectroscopy and electrochemistry, we highlight complex relationships between structure and chemical composition of the different nanocatalysts, nature of the support material, and initial and long-term OER activity. Independently on the chemical nature of the fresh nanocatalyst, we show that Ir(0) and Ir(III) species are gradually oxidized into Ir(IV) and Ir(V) species along with increased concentration of hydroxyl groups and water molecules after accelerated stress tests in OER conditions. In contrast, no change in the mean oxidation state, no change in the hydroxyl/water coverage and constant OER activity are noticed on benchmark micrometre-sized IrO2 particles. Our results thus suggest that the progressive increase of the Ir fraction with (+IV) valency associated with the decrease in the number of isolated nanoparticles concomitantly contribute to the drop of the specific activity towards the OER in practical PEMWE anode operating conditions. To know more about this. 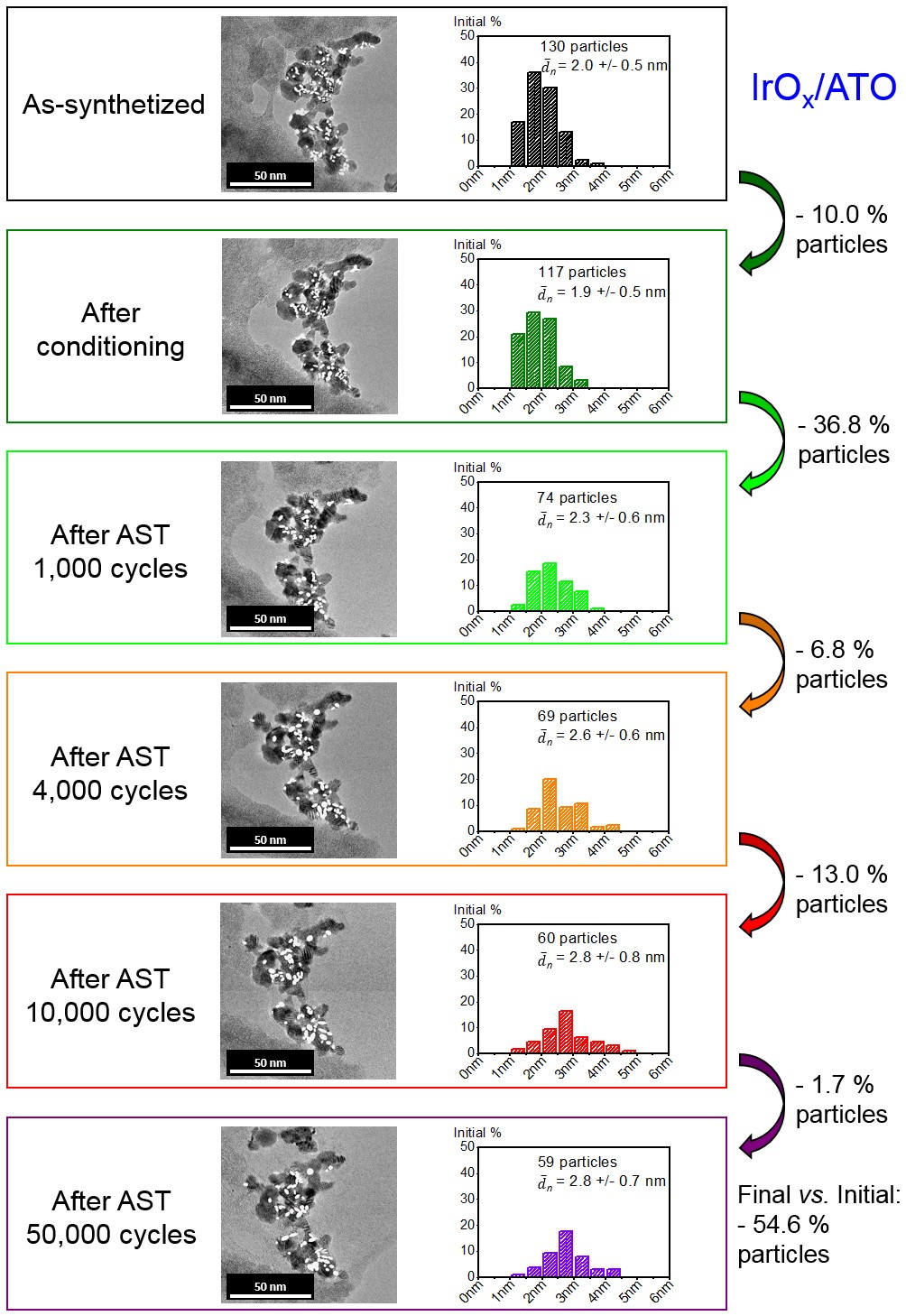 Figure 2. IL-TEM images and changes of the particle size distribution on IrOx/ATO during potential cycling between 1.20 < E < 1.60 V vs. RHE at T = 298 K. Only isolated particles were considered to build the histograms. White plain ellipses were drawn over counted particles. The number-averaged average Feret diameter is plotted in the histograms.
Beyond enhanced OER activity, we aim at developing experimental methodologies which can determine in situ which fraction of the current is used for the OER and how much contributes to dissolution of the metal nanocatalysts (Ir, Ir oxides or M-rich core@Ir-shell, Irx+ + My+ ions). To determine the selectivity of the synthesized nanocatalysts, we probe the extent of metal dissolution wby inductively coupled plasma mass spectrometry (ICP-MS), an analytical tool, which can detect trace levels (parts per billion) of elements dissolved in solution. This technique provides a time-resolved concentration profile of metals in the electrolyte, which will then be correlated with current and potential. The influence of various operational parameters (pH, temperature, potential window, etc.) on these processes is currently assessed.

This work is performed within the framework of the Centre of Excellence of Multifunctional Architectured Materials "CEMAM" n° AN-10-LABX-44-01 funded by the "Investments for the Future" program. The authors acknowledge financial support from the French National Research Agency through the MOISE project (grant number ANR-17-CE05-0033).