X-rays provide a valuable tool for analysis as they have a deep penetration in the light materials like water or polymer membranes. This gives the opportunity to investigate electrochemical systems in situ i.e. with electrolyte and under electrochemical potential. By using high brilliance X-ray sources provided by third generation synchrotrons, one can probe metal surfaces. In this framework, we are performing in situ surface X-ray diffraction at the surface of single crystal electrodes, at ESRF, on beamlines CRG-D2AM and ID03, in collaboration with Institut Néel (Yvonne Soldo and Maurizio De Santis) and Jakub Drnec from ESRF, resp.
We developed two spectro-electrochemical cells. The first one is a thin layer cell that is optimized for low electrolyte contribution and that can be used with sample booth horizontal and vertical. The second one is a reverse hanging meniscus configuration that provides a better electro-chemical configuration, especially for kinetic investigations. 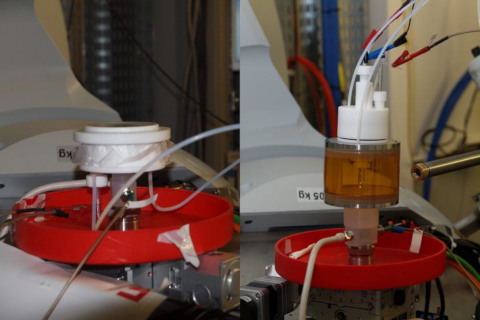 The determination of a surface structure, at a given electrochemical potential, is performed by measuring several crystal truncation rods (CTRs) of a sample. Then, the data modeling with the ROD software allows to determine the organization of the surface (nature and occupancy of the atomic layers, interatomic distances, disorder...). The following figure shows the rods of an Ir(111) electrode. 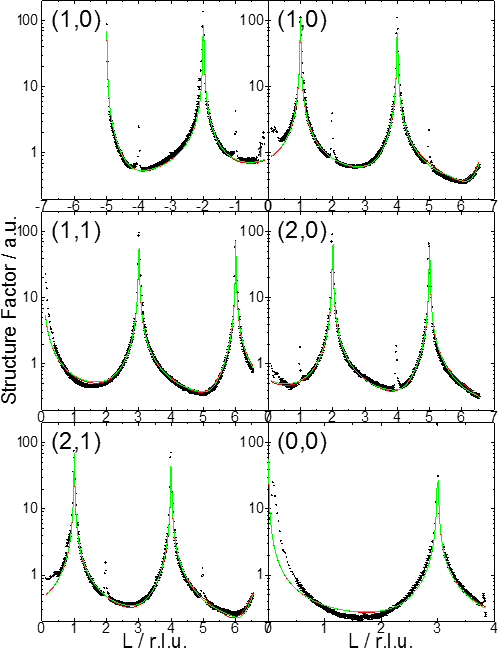 The goal is to follow in situ and in real time modifications at the electrode surface. As surface transformations are much faster than CTRs measurements duration, we can only record one or two points in reciprocal space during a kinetic measurement. We choose points with high sensitivity to surface structure, usually in anti-Bragg position i.e. in the middle of two Bragg peaks, along a CTR. We did a first campaign on beamline CRG-D2AM for the deposition and the dissolution of Pd on Pt(111). 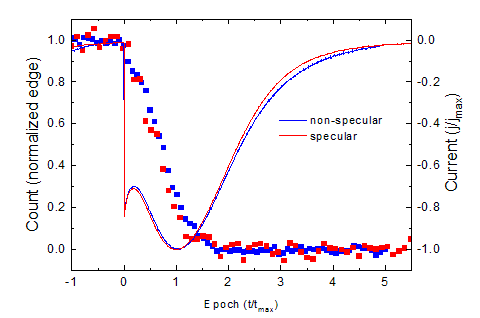 On figure 3, time scales are normalized to the maximum deposition current. Non-specular signal is related to ordered deposit while specular is sensitive to ordered and non-ordered deposits.

SRXRD couples surface X-Ray diffraction, widely used to solve the atomic structure at the surface of single crystals, to X-Ray absorption near edge spectroscopy (XANES), highly sensitive to the oxidation states. The experimental approach is supported by the theoretical ab initio calculations of the FDMNES software developped by Yves Joly (Institut Néel), recently implemented with the simulation of surface diffraction experiments  and now under development for electrochemical interfaces description. We did first measurements on beamline CRG-D2AM for the Pt(111) surface in sulfuric acid solution.