The reactivity in heterogeneous catalysis and especially in electrocatalysis is very sensitive to the surface structure. To bridge surface reactivity and structure, it is mandatory to work on well-defined surfaces. Single crystal electrodes, for which a single orientation can be put in contact with the electrolyte, represent a very interesting model catalyst for the study of the crystallographic orientation on catalytic activity. Our team has extensive experience in this field. Surfaces can be employed as prepared or modified by deposition of foreign metals to gains new activities. By the way, we are also investigating the mechanism of modification itself, that we are performing using electrochemical deposition.

Recently, we have investigated the activity of Ir single crystal surfaces for the oxygen evolution reaction (OER). In collaboration with Norway University of Science and Technology, we performed conventional and dynamic electrochemical impedance spectroscopy (EIS and DEIS resp.) at the onset of OER. In these conditions, the Ir surface undergoes structural (formation of surface defects, buckling and roughening of the surface) and chemical (surface oxidation and dissolution) changes. The presence of oxygen bubbles that form and detach adds another difficulty to EIS measurements. Thanks to DEIS, a more accurate picture of the phenomena occurring at the Ir(111) electrode-electrolyte interface was achieved. Only DEIS proved capable to capture the evolution of electrochemical impedance of iridium upon OER while limiting the structural and chemical changes occurring at high potentials. More details. 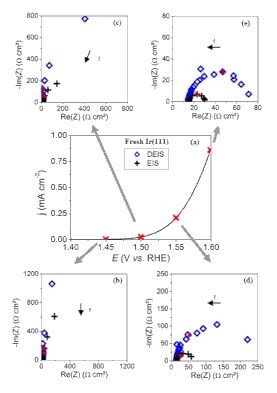 On Pt(111) surfaces modifed by Pd deposition, we investigated the activity of NaBH4 electro-oxydation for several Pd thicknesses. All the PdxML/Pt(111) electrodes surfaces are more active for the NaBH4 oxydation than Pt(111) below 0.6 V vs. RHE. The most active surface is Pd1ML/Pt(111) followed by the thicker PdxML/Pt(111) ones. So, the most likely explanations to account for the superior activity of Pd surfaces than Pt ones can be three-fold: (i) the larger oxophilicity of Pd than Pt facilitates the removal of strongly-adsorbed BHad intermediates in the well-known Langmuir-Hinshelwood pathway; (ii) the heterogeneous hydrolysis of BH4 is directed towards the partial dissociation into BH3 species, that can be oxidized faster than their BHad counterparts; (iii) the slower HER at Pd surface atoms than Pt ones, Pd still being efficient to oxidize the Had and BHx,ad species formed in the dissociative adsorption of BH4. More details. 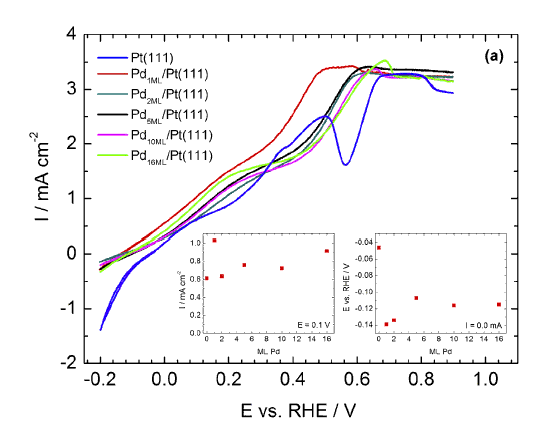 Concerning the electrochemical deposition, most of the work is done using surface X-ray diffraction. More details.